Through the 1920s, the Junior League of Duluth continued the work done by the Kings Daughter’s Society in the previous decade.

This included support and staffing of the Day Nursery that provided daycare for the children of women employed by industries in the West End (Lincoln Park).

League members continued supporting the work of the Red Cross through the 1920s. Like many of Junior Leagues during World War I, women in Duluth worked with and for the Red Cross. Through the second half of the 1910s, the King’s Daughters Society produced garments that were sent to hospitals in Europe. This garment-production also provided much-needed employment for women. While the idea of supporting the troops and providing work did not originate in Duluth–it was borrowed from the Eli Bates settlement house in Chicago–the members of the Kings Daughter’s Society not only secured the fabric at wholesale prices but also raised money to rent a manufacturing space and machines through an indoor carnival that included dancing and other forms of entertainment. 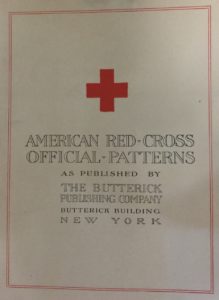 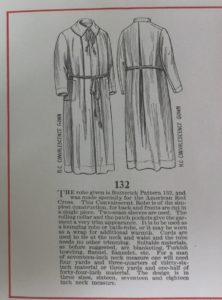 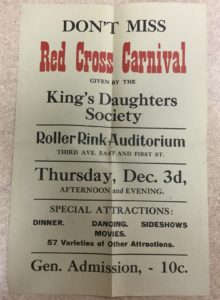 [All images courtesy of Archives and Special Collections, University of Minnesota Duluth.]

Beginning in 1919 and continuing through the 1920s, the Junior League of Duluth supported two other organizations in the city: Lighthouse for the Blind and the Masonic Baby Clinic

The Lighthouse Center for Vision Loss began as a “workshop and a social center for people with vision loss” that focused on providing employment through the production of a range of items including toilet paper and pillowcases. In the 1960s and 1970s the organization turned more to social services and rehabilitation and today includes programs like “Low Vision Outreach to Seniors.” Over the last century, the JLD has continued to support the work of the Lighthouse Center for Vision Loss; in May 2017, volunteers helped to organize a new accessible apartment at Mount Royal Manor.

While Lighthouse supported adults, the Masonic Baby Clinic met the needs of children in our area. A July 1920 Duluth Herald article, notes that 19 children had entered the clinic including a child who, having lost sight in one eye was, through the work of the clinic, able to travel to Chicago for treatment.  The Infant Clinic was introduced by the Scottish Rite in response to the 1910 cholera outbreak in Duluth. Over the next decades, Scottish Rite introduced the Infant Welfare Department which included an open clinic and house visits; the first clinic quickly moved from a hospital tent to the Temple building at Lake Avenue and 2nd Street. Four more clinics opened across the city and were staffed by medical volunteers and “the many members of the Junior League.” The clinics were eventually phased out in the 1960s.