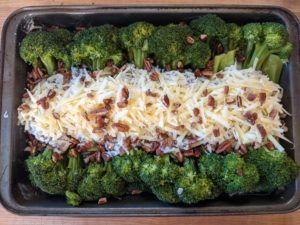 As a relative newcomer to Duluth, the Junior League has been immensely valuable in helping me to make connections to the area both present and past. I moved here for work in 2016, a newcomer to Minnesota, and was kindly pointed to JLD by a colleague. Taking her advice was one of the best things I could have done. The volunteer opportunities and Festival of Trees preparations put me in touch with peers in League and organizations and individuals throughout the Twin Ports who engage in amazing work, while toffee breaking and social events introduced me to generations of local women who have been and remain pillars of the community.

I love to cook, not just for sustenance or pleasure but as a way of getting to know cultures and communities, so when the idea of cooking from the old Junior League cookbooks came up I knew I wanted to participate, both to share in the ongoing celebration of the League and to dive into its past. I loved reading through the range of recipes included in The Best of Thymes: Celebrating 90 Years of the Junior League of Duluth, both for the fun of spotting the names of contributors I now know personally through our shared involvement in League, on back through the years to recipes from the organization that preceded it, the King’s Daughters.

In the end, I opted to make a hearty winter meal, using three recipes from the book that strike me, at least as a transplanted East Coaster, as especially representative of the area: Layered Broccoli Wild Rice Casserole (contributed by Sherri DeWulf), Onion Bread (contributed by Susan Henke), and a green salad dressed with Mustard Garlic Dressing (contributed by Karen Mokros). With a slight tweak to the first one, they made for a warm and highly satisfying vegetarian winter dinner, also good for Meatless Mondays! 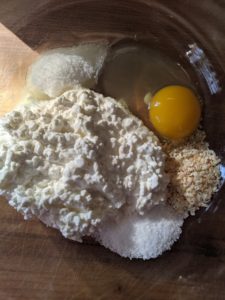 ed with the bread, to give it plenty of time to rise and proof while prepping the rest of the food. Using eggs and cottage cheese for both moisture and fat, I was not sure what the resulting texture would be but very curious to find out, and I knew the dried onions would make for a savory loaf. While the yeast proofed in a quarter cup of cold water, I combined a cup of cottage cheese, an egg, a half a tablespoon of dehydrated minced onion, and some salt and a bit of sugar (to feed the yeast), then stirred in the bubbling yeast mixture. Two cups of flour were stirred in and briefly combined by hand (but not really kneaded), leading me to expect a tender, almost cake-like crumb (this turned out to be correct). The dough then got covered and went to rise in the warmest, least drafty corner of my kitchen (on top of a storage rack in a corner well away from the back door, where I am enough of a baking dork to keep a digital thermometer to assure me it’s still in the high 70s in that immediate area). The onion smelled amazing, like everything bagels, so I was super excited for the results! (And not disappointed, in the end.) 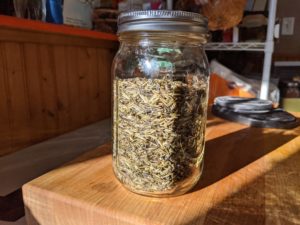 The recipe for the wild rice casserole started with 4 cups of cooked wild rice, which the author estimated would be the results of about one cup, cooked. I ended up using a cup and a half, just to be safe, and was glad I did. (I had the pressure cooking robot do all the work for me for this step – 2 parts water to 1 part wild rice, plus a pinch of salt.) I love the way folks around here make such enthusiastic use of wild rice, and the fact that I can buy locally harvested lake rice and support indigenous businesses at a wide range of local shops. The recipe called for “6 stalks” of broccoli. I wasn’t sure how to interpret this and ended up going with 6 smallish heads, which was in the end almost certainly more than the author intended but in my house everyone LOVES broccoli, even the dogs (!), so I figured I would be safe erring on the side of overabundance. (I had to get my partner to guard the cutting board with the broccoli while I set up the steamer, to keep the oldest dog from swiping a head for himself.) Stalks were halved lengthwise and steamed until just barely tender, a couple tablespoons of onions got minced up and sizzled with two tablespoons of butter, and while that came to temperature I rounded up the rest of the ingredients for a white sauce: 2 tablespoons of flour, a bit of salt, and a cup of milk. Once the onions were visibly softening, they got sprinkled with flour and salt, stirred until that came together, and the milk stirred in a few tablespoons at a time until each addition was incorporated. (This again confirmed how amazing onions smell.) Off the heat, I stirred in half a cup of sour cream and asked the Internet if I had earned my Minnesota badge for making a white sauce to use in a casserole.

This proved just enough time for the broccoli to steam, so I pulled it out of the pot and let it drain in a colander while mixing the white sauce with the cooked wild rice and grated cheese to top the dish off with, and discovered that the baking dish the recipe called for was 7 by 11 inches, not a size I possess. Since I had opted for such a large quantity of broccoli, I decided to use my 9 by 13 inch pan, which worked very well, and buttered it up. (Right around this time the dough completed its first rise, so I buttered up a souffle pan, per the instructions, and deflated the dough, rolled it into a ball, and tucked it into the souffle pan to proof before baking, while the oven preheated to 350 degrees. I like using an old plastic grocery bag to cover proofing bread dough, as it floats away from the surface but keeps away moving air.)

Assembling the layers was fun: you spread half the rice mixture over the bottom of the pan, then lay broccoli stalk halves, cut side down, alternating directions so the florets line both long sides of the pan and create a valley down the center, that then gets filled with the rest of the rice and topped with shredded Cheddar (yum). The original recipe called for crumbled bacon at this point for the final garnish, but I substituted chopped pecans for a similarly fatty crunch that would keep the dish meatless – no regrets.

The bread baked while we shoveled the front walk and moved donations around for a winter gear drive, and the assembled casserole rested in the fridge while we ran errands during the afternoon.

Then, when we got home, we just preheated the oven while unpacking groceries and popped in the casserole for about half an hour, pretty much per the instructions. (I also tore up and rinsed some romaine lettuce for a nice crunchy salad, and combined the dressing ingredients in a half pint Mason jar for a dual mixing vessel – oil and vinegar, salt, pepper, sugar, dry mustard, and minced garlic, just shake it up – and storage container for any leftovers). The one final variation I made to the casserole was cranking on the broiler for the last minute or two, just to lightly brown the cheese layer.

And, preparing the salad

Then it was time to dig in! The bread was fluffy and tender and almost reminded me of a brioche consistency, with that delightful onion flavor all throughout, and was not nearly as heavy as I’d worried it would be, for all the protein it contained. The creamy rice and crunchy nuts were a great foil for the crisp-tender broccoli, and came across as rich and warming without being stodgy or heavy. And the sharp, salty mustard-garlic dressing contrasted nicely with the buttery dairy components of the rest of the meal.

The practical, relaxed pace of preparation for each dish fit in nicely with a busy winter weekend day, not too fussy and with different points to pause and take care of the rest of life while still assuring a nourishing meal at the end of the day. I continue to be grateful for the community of women who have contributed to the Junior League of Duluth over the years, and to feel supported by them as I make my home here and put down roots in my community.