In the 1950s the Junior League of Duluth continued their work with the Mental Hygiene clinic and also played a central role in the establishment and funding of the Rehabilitation Center now known as the Polinsky Medical Center at Essentia Health. The center provides “specialized outpatient therapy service” and support for adults and children with disabilities. The team also offers neurological rehabilitation services.

In an article exploring the Rehabilitation Center’s rich history, Joan Oswald notes that the inspiration for the Junior League of Duluth to “launch a campaign to create Duluth’s first medical center dedicated solely to physical rehabilitation” came from research undertaken by league members in the 1940s. As the JLD does so often, members brought best practices from other communities in the United States to the Duluth Hillside neighborhood. By the 1950s, the Rehabilitation Center had outgrown its first location on First Street and the Junior League of Duluth members again committed to raising funds so that it could move to a building on First Avenue where it remained for another decade.  On July 13th, 2020, just as the JLD began celebrating our centennial, the Polinksy Medical Rehabilitation Center left its home on Second Street for the Miller Hill Health Plaza.

In addition to the Junior League of Duluth’s commitment to improving the lives of Duluth residents through a focus on health and rehabilitation, in the 1950s, the JLD, like thirty-two other leagues in the United States, turned their attention to the arts and support of education programming on the television (the JLD was instrumental in establishing PBS locally).

The connection between Junior Leagues and the arts had always been strong; through the 1920s and 1930s members were docents and, at a meeting in with delegates from 16 local leagues, the president of the Metropolitan Museum of Art stated that “we must help educate the public to make the best use of its free hours…” (AJLI, 101). In addition to teaching art classes, supporting theater productions, and creating arts brochures, a number of leagues co-sponsored new children’s museums; our League was involved with the Chisholm Museum and the Tweed Museum of Art. 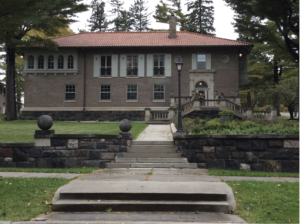 George and Alice Tweed collected a wide range of works of art that they displayed in their home. After Mr. Tweed died in 1946, Alice donated the collection to the University of Minnesota Duluth; it was moved to the main campus when the new art gallery opened in 1958. Over the next decades, members developed a docent and gallery enrichment program which helped to educate museum-goers.

It was in the 1950s that the Junior League of Duluth established one of the longest-running and most popular fundraisers, the “next-to-new-sale.” Members donated and organized clothing that was then made available to the general public for purchase. Funds and awareness were also raised by the Follies (1959-60). Very popular events for Leagues around the country, the follies took inspiration from events hosted by Marry Harriman (AJLI, 106). Directors were hired from New York City and League members staged and performed; performances and sponsorship helped to fund a variety of initiatives.