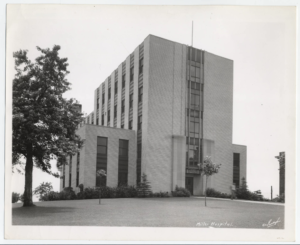 In the 1930s, the Junior League of Duluth continued their support of the Day Nursery in Lincoln Park while also turning attention to other needs in the community.

League members volunteered at the Miller Memorial Hospital Dispensary (now part of Essentia) in 1932 and 1933 as well as provided supplies for and served school lunches to children struggling with food insecurity.

Like many Leagues across the nation during the Depression, the JLD turned its attention to social welfare programming with a particular focus on improving the physical and mental health of young people.

In fact, in 1938, JLD members were involved in the formation of the Duluth Mental Hygiene Clinic; this clinic provided mental health support for children. While the clinic began in the Twin Ports, by the late 1960s, services had expanded into Lake, Cook, and Carlton Counties. Better known today as the Human Development Center, the nonprofit continues to provide “comprehensive integrated mental health and addiction services to all ages”

That same year, Junior League of New York member, Eleanor Roosevelt, called, in Junior League Magazine, for Leagues to “work with other groups” rather than in isolation because such an approach leads to “frustration and ineffectiveness.” (AJLI, 72). She also challenged League members to “observe what lies behind” a “necessity” like the childrens’ clinics with which so many Leagues were involved. She noted that the issue that leads to necessities of this nature is economic insecurity and she invited members to use their own security, background, and education to research the “fundamental causes of poverty and disease” and to “see their communities’ problems in a clear light.” (AJLI, 73).

This call for Leagues to work with community partners and community members in a way that allows one to see the largest challenges continues to inform the work of the JLD more than eighty years later.