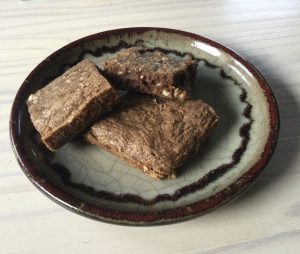 I love to look through cookbooks used and loved by others; this is especially true of historical ones. I always search for the pieces of paper slipped between the pages, the personal notes or annotations, or the splattered pages that tell me which were favorite recipes. 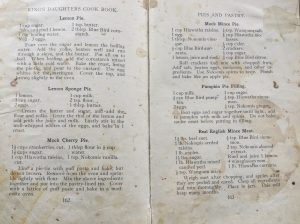 I selected this recipe based on the notes and “drip” patterns that I found as I turned the pages of the King’s Daughters Cookbook (1916). First, I came to a page with lots of drips and I was tempted but didn’t have all the ingredients needed to make the “Mock Cherry Pie” so I kept flipping the pages until I came across  “good” written next to this “Brownies, II” recipe. 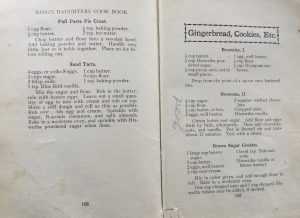 Full confession at this point: I have never made a good batch of brownies. They are either over-baked or under-baked.

Spoiler alert: I still have never made a good batch of brownies that I’d be willing to share. 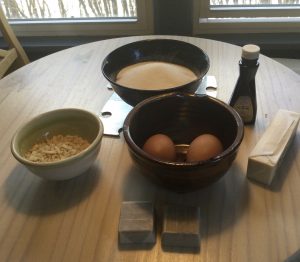 Like the recipe Shevaun Stocker chose for her post, this recipe does not provide a lot of direction.

I creamed the butter and sugar and melted the chocolate in the microwave (there was no way I was going to do it on the stove top). 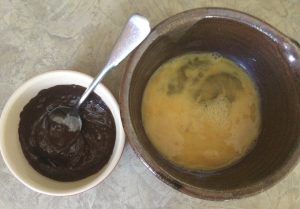 Next, I chose a random amount of almonds (chopped) and eye-balled the “vanilla” in the recipe–more than dash but not a full splash?–and followed the rest of the steps. The batter was lighter than I expected somewhere between a blondie and a dark-brownie. This is possibly because of the amount of chocolate I used in the recipe. 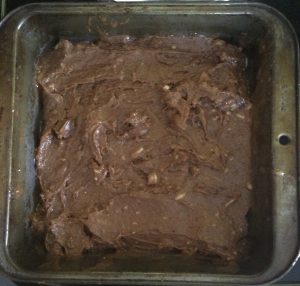 The pan went into a 350F oven. I chose this temperature based on other brownies recipes because, unlike others in this cookbook, this recipe didn’t even offer the recommendation of a hot, medium, or cool oven. 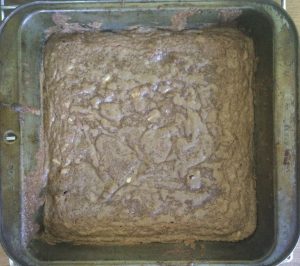 Fearing the over-baked brownie I pulled out the pan as soon as the timer went off but I should have trusted my instinct and left them in a couple minutes longer. After cooling on a rack I cut them and it was quickly evident that they were underbaked. My husband agreed that they were not as chocolatey as we had expected and he described their texture as a combination of mousse and a brownie. They were delicious or “good” but not something I’d share outside my pod… just in case there were any questions about undercooked eggs.

I’m not the only person who struggles making brownies. If you’d like some entertainment check out the Great British Baking Show, Season 10, Chocolate Week Episode; a tent full of expert bakers struggled with American “tray-bakes.”