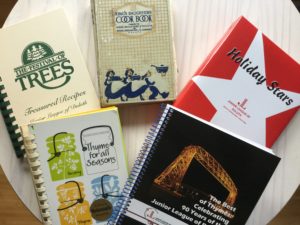 As part of the celebration of the Junior League of Duluth’s 90th year, the JLD published our fifth cookbook, The Best of Thymes. Sustainer, Rita Rosenberger, and her committee selected favorite recipes from the League’s previous cookbooks including the first, the King’s Daughters Cookbook (published in 1916). 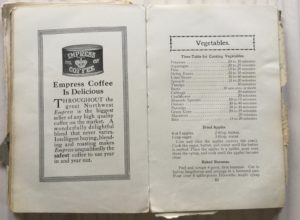 In July of this year, the Junior League of Duluth began celebrating our centennial year.

It was in July of 1920 that the King’s Daughters Society, under the leadership of Elisabeth Congdon, voted to begin the year-long process of becoming the Junior League of Duluth and joining what is now known as the Association of Junior Leagues International.

Over the next year-and-a-half, the Junior League of Duluth will be celebrating 100 years of developing the potential of women, improving communities, and promoting voluntarism while we also look to the role we can play in the next century as catalysts for change in our communities.

As part of these celebrations, over the next 10 months, we will highlight a century of projects and programming in the Twin Ports. Stay-tuned for a November post sharing the work done by the women of the Junior League in the 1920s. In addition, we will turn back to our cookbooks; Junior League of Duluth members will document the making of favorite recipes through vlogs and blogs. Our first vlog features a recipe that is perfect for the whole family!

Junior Leagues across the United States published cookbooks to raise money to support their community projects. A Southern Food and Beverage Museum blog author notes that the Charleston Receipts cookbook, published in 1950, is the oldest example still in print. These cookbooks are often highly sought by collectors for the way they capture the histories of regional cuisines of the white, heteronormative, upper-middle and upper-classes. In May of this year, Larrison Campbell talked about cracking open the cookbooks inherited from her mother as the reality of our national shutdown became more evident. In an Vanity Fair article, Campbell describes recipes for elaborately planned breakfasts and luncheons that were “hard to relate to.” Campbell continued, “And it’s not just because I’m a divorced lesbian, a group that I suspect was not well represented in league membership. But making a shad roe for breakfast suggests a very different morning” especially during COVID when so many women are carrying a heavier burden. Campbell notes, however, that between the fancy recipes for a large party are easy recipes that can be made quickly between zoom calls, work, and online school sessions.

The Junior League of Duluth cookbooks provide one way to celebrate and explore our histories. Each recipe comes paired with the name of the person who submitted it. Whether it’s comfort food or a favorite “fancy” meal or dessert, join us as we open the pages of the cookbooks and invite all of you into our kitchens.

March: Brownie II: A recipe from the King’s Daughters Cookbook